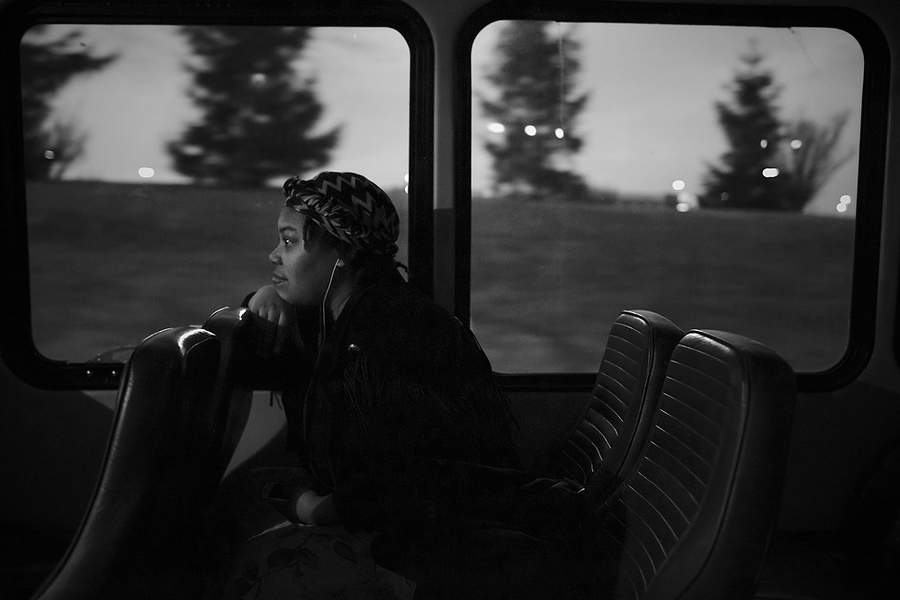 Ashley Longino, 23, rides the Greater Rickenbacker Employee Access Transit shuttle at 7 a.m. to her $9.50 an hour warehouse job on Tuesday, February 21, 2017 in Groveport, Ohio. Longino relies on the bus and the shuttle to get her from her south side Columbus home her job at a logistics center near Groveport. The cities of Groveport and Obetz pay for the shuttle's operation, estimated at about $531,000 for Groveport and $160,000 for Obetz. A few of the companies that operate warehouses in the area each contributed $5,000 for the shuttle's operation initially, but chose not to provide long-term support. Though unemployment in Franklin County has steadily ticked down since 2010 - it’s currently under 5 percent - the number of people living at or below 200 percent of the poverty line, defined as $49,200 for a family of four, has remained steady, with just over 400,000 residents in 2015, the most recent data set. 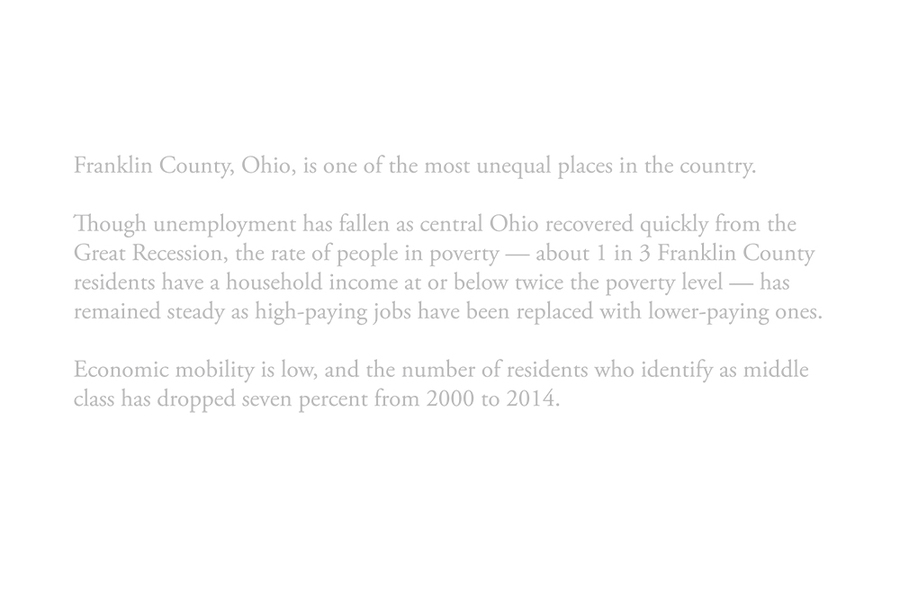 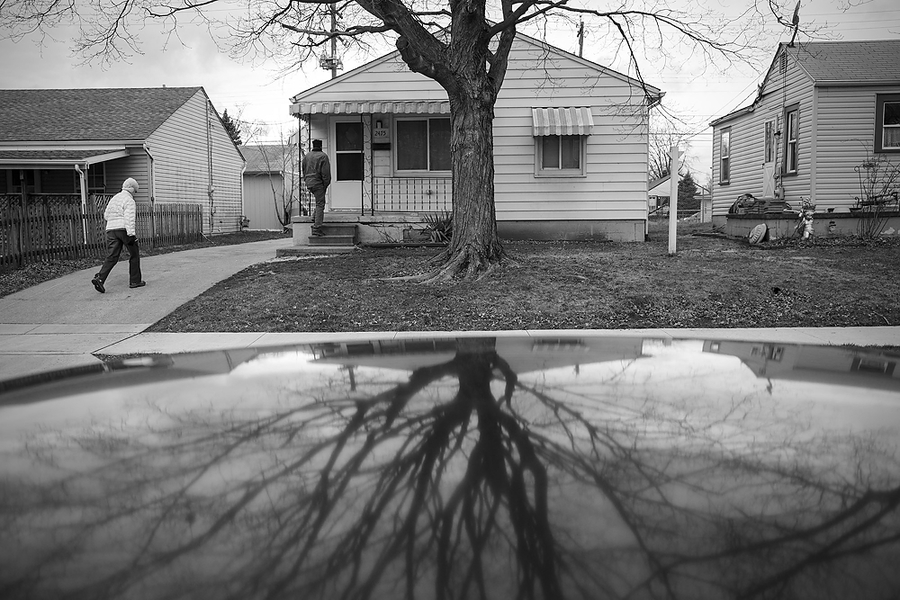 Marge Galloway, left, and Brandon Thompson, second from left, walk up to a house on Azelda Avenue in Columbus’ North Linden neighborhood while canvassing with the Mid-Ohio Workers Association on Saturday, February 25, 2017 in Columbus, Ohio. The association, comprised of volunteers and members, canvasses neighborhoods for low-wage workers who might need help with paying their bills, getting health care or legal advice, and keeping their homes. Columbus is one of the most economically segregated cities in the country: One census tract in Clintonville, west of I-71, has a median annual household income of $100,284. On the east side of I-71 in North Linden, about two miles from Clintonville, the median household income is $27,702. 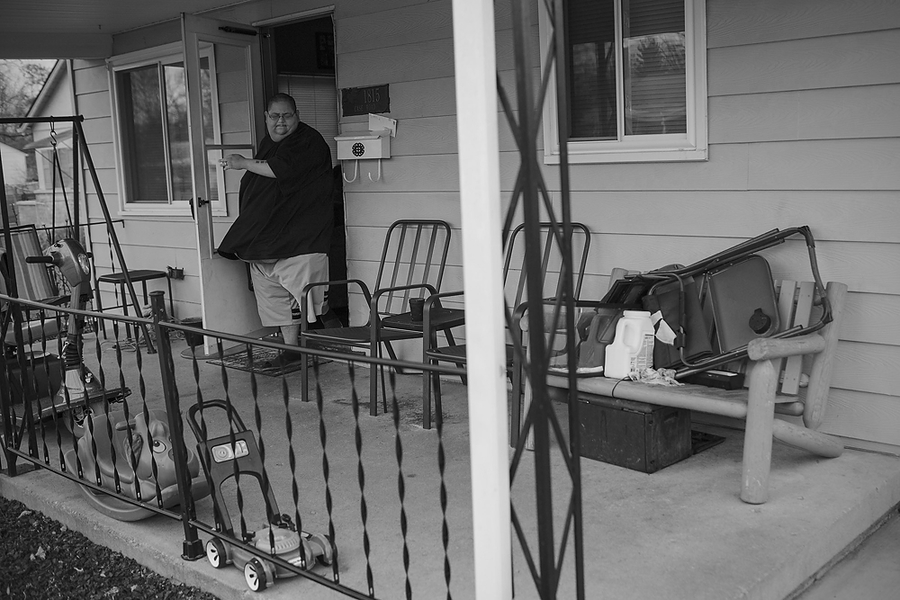 After saying goodbye to his wife, John Carpenter leaves his North Linden home as he heads to work at 2 p.m. on Tuesday, February 28, 2017 in Columbus, Ohio. John and his wife, Ashley, both work as home-health care aides — he works between 30 and 56 hours per week, and she works more than 60 hours per week — so they can pay their home mortgage and care for their 2-year-old son. "I can't remember the last day off," he said. The couple work in one of the fastest-growing job sectors in the country, with the number of home-health care workers in the United States more than doubling since 2005. John recently received a raise, from $9.50 to $11 an hour and Ashley makes $8.15 an hour - minimum wage - while she sleeps at her clients' homes and $11.25 an hour as a supervisor the rest of the time. John likes his job, but works seven days a week. "If you don't work, you don't get paid," he said. 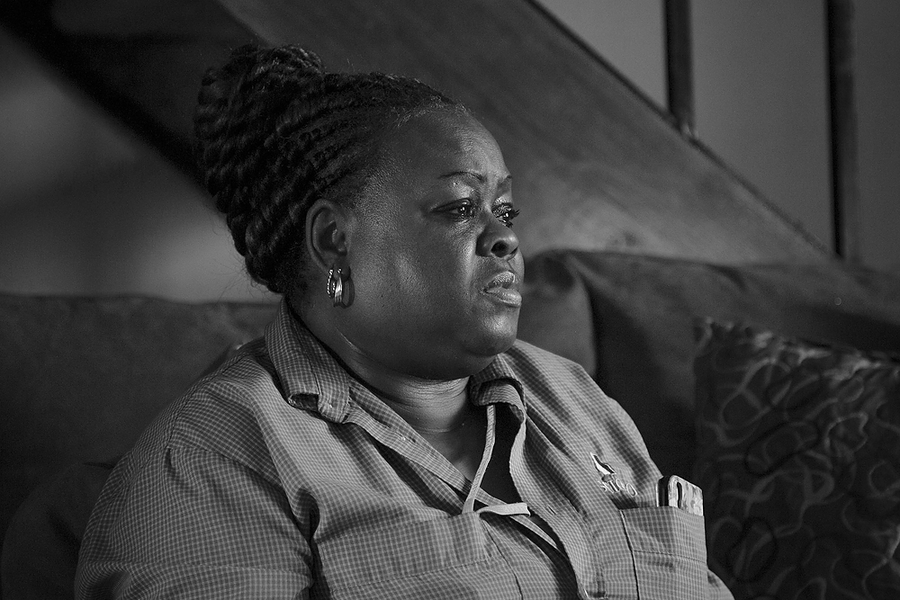 Diane Hudson rests inside her north side townhouse just before leaving to start her 5 p.m. to 1:30 a.m. shift as a janitor for a cleaning company that contracts janitorial services to local businesses. Hudson, who’s worked as a janitor for her company for nine years, makes $10.90 an hour cleaning three buildings at Columbus Academy, a private school in nearby Gahanna, Ohio, where student tuition averages $22,871 a year. She moved to Columbus from Youngstown in search of better job opportunities after losing a good-paying job on an assembly line when the plant in northeast Ohio closed. "This paycheck? It's gone almost as soon as I get it," she said. "The whole reason I left was to better myself, but I have struggled." 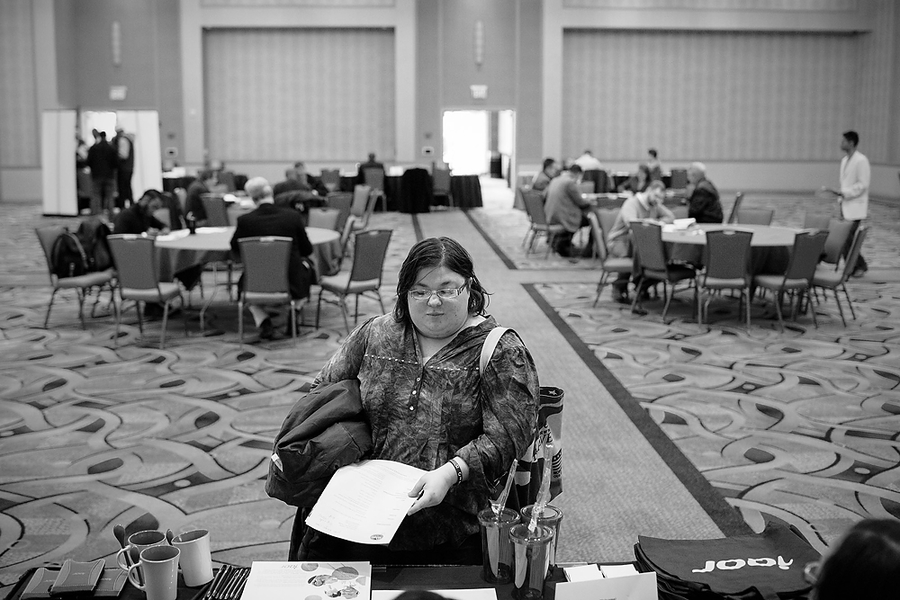 Deborah Gilmore talks to recruiters at iQor, a call center based in New Albany, during a job fair on Tuesday, January 31, 2017 at Hollywood Casino in Columbus, Ohio. Gilmore, 26, has worked several low-wage jobs while caring full-time for her mother. After interviewing with several companies at the fair, Gilmore landed a job that pays $12.50 an hour as a cashier at Hollywood Casino. The casino sits on the former site of a Delphi auto parts manufacturing plant, where workers took home about $70,000 a year with overtime. 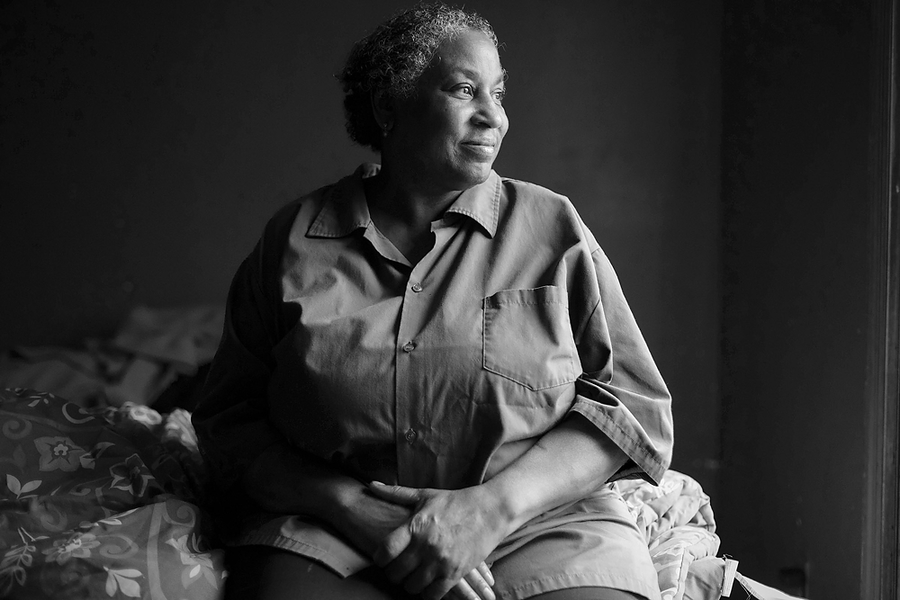 Alice Gardner sits inside her bedroom on Wednesday, February 15, 2017 at her North Linden home in Columbus, Ohio. Gardner travels the geographic income divide every day when she drives from her North Linden home to her part-time job as a food service worker at Village Academy, a private school in Powell, Ohio. She started the job with her company, which contracts with the school, ten years ago for $9.15 an hour but now makes $11 an hour. Gardner, 60, qualifies for Medicaid, but fears taking a second job and losing that health benefit, an eligibility cliff familiar to many low-wage workers. She has carpal tunnel and had surgery last year to repair a torn rotator cuff. Every day, though, she still moves 50-pound boxes of fruit while preparing to feed students at school. 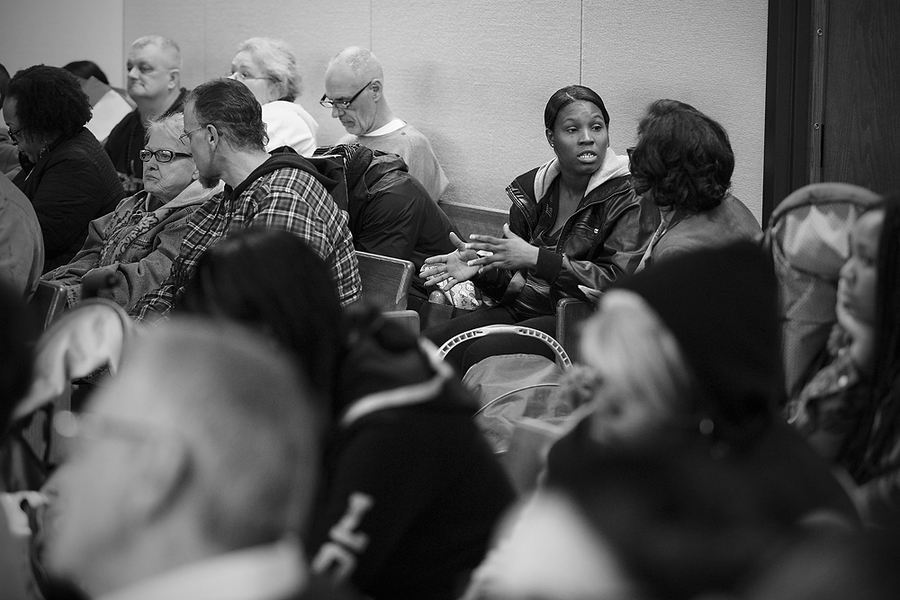 Jennifer Clark, center, speaks with mediator Joy Marshall, right, of Community Mediation Services of Central Ohio, while waiting for her case to be called during eviction court hearings on Tuesday, February 7, 2017 at the Franklin County Municipal Courthouse in Columbus, Ohio. Clark, 36, has a one-month-old daughter and makes $9-an-hour with no paid leave at a downtown Columbus hotel. She fell behind on her rent after going weeks without pay after giving birth. She thought she had a better job a few years ago at a distribution center, but found that her hours would be suddenly cut short. “Some shifts, it would just be three hours,” she said. “We’d just sit there in the cafeteria waiting for a bus. I couldn’t do it anymore." Franklin County’s eviction court is the state’s busiest, with about 19,000 filings a year. Today, Clark's landlord didn't want to work out a payment plan for back rent, but Marshall was able to negotiate a dismissal of the eviction after Clark agreed to move out by a set date. She and her children, 13-year-old twin girls, a 15-year-old son and a newborn daughter, plan to move in with a family member. 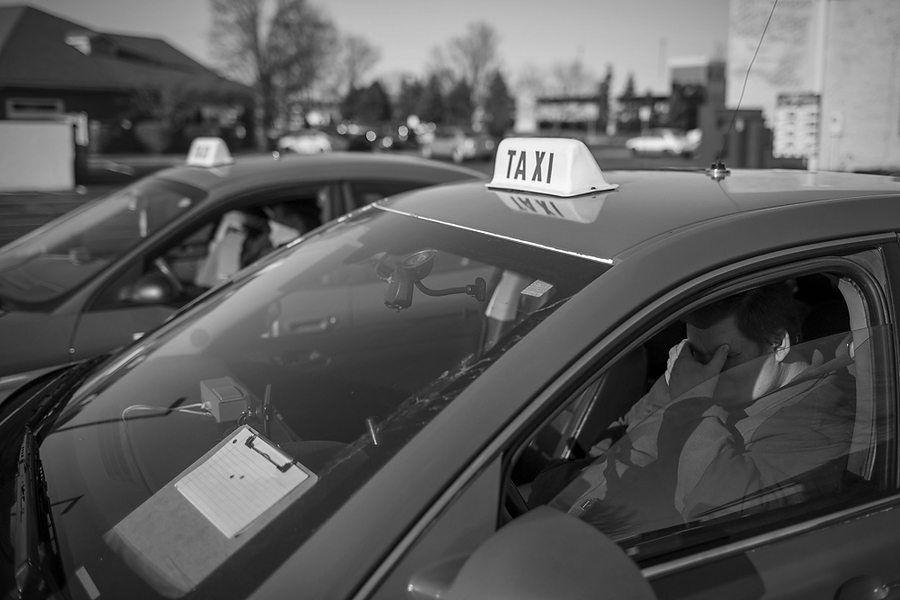 Harry Steininger waits in his car along with other Dublin Taxi drivers to get dispatched one afternoon on Wednesday, March 8, 2017 in Dublin, Ohio. He works the third shift, from 3:30 p.m. to 5 a.m., usually six days a week. Steininger, who’s driven a cab since 2003, used to pull in about $70,000 a year but his income has dropped to about $27,000 a year now that other ride-sharing services such as Uber and Lyft operate in Columbus. “We’ll never see them days again,” he said of the living he used to earn. Right now, he's working to save up a few thousand dollars to buy a small mobile home outside of the city. 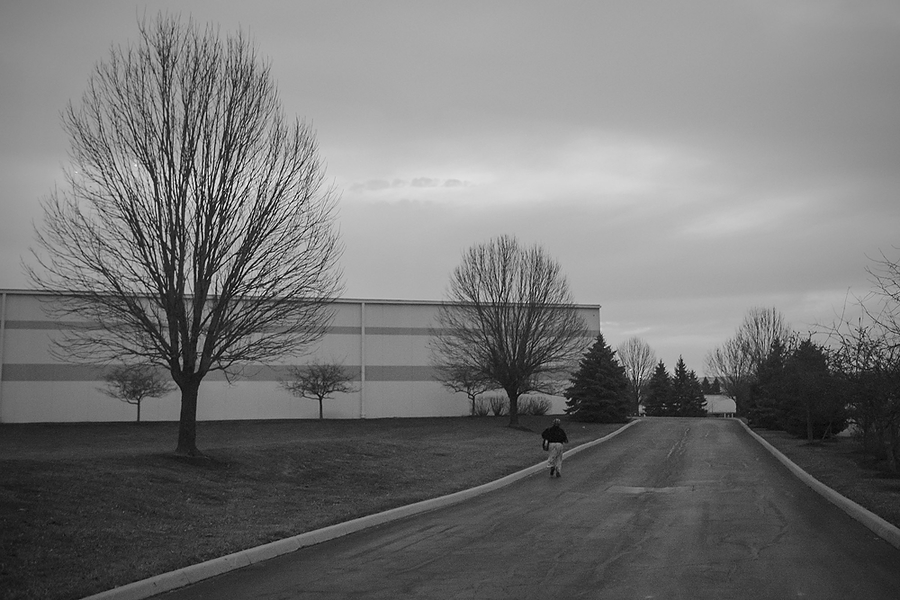 After her hour-long trip to work, Ashley Longino, 23, walks up the road to her 7:30 a.m. shift warehouse job after getting off the Greater Rickenbacker Employee Access Transit shuttle just after 7 a.m. on Tuesday, February 21, 2017 in Groveport, Ohio. She daydreams about someday owning a car, stopping for coffee on her way to work at an office. "I needed the money, so I took this job," she said. "I did expect it to pay a little more."